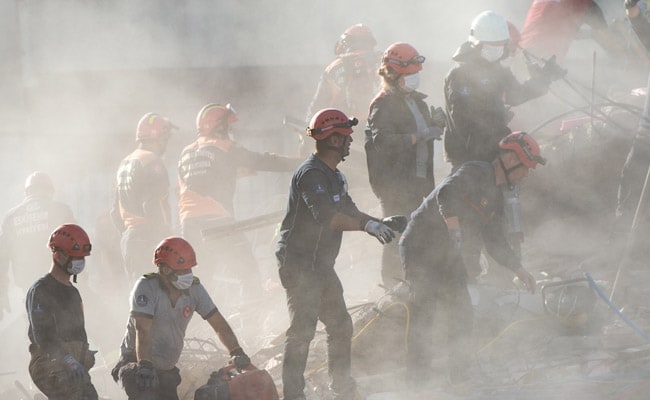 The government’s disaster agency AFAD said 100 people have been rescued.

Rescuers raced against the clock to save people trapped under rubble in Turkey and Greece on Saturday as anguished mourners buried the first victims of a powerful earthquake that claimed 30 lives.

The 7.0-magnitude quake killed 28 people and injured nearly 900 in Turkey after striking on Friday afternoon near the west coast town of Seferihisar in Izmir province.

Also killing two teenagers on their way home from school in Greece, it caused a mini-tsunami on the Aegean island of Samos and a sea surge that turned streets into rushing rivers in one Turkish coastal town.

Turkish authorities registered nearly 600 aftershocks, dozens of them stronger than 4.0 magnitude, complicating the search for those believed to still be breathing under mountains of concrete debris.

In Bayrakli, near the Turkish coastal resort city of Izmir that was heaviest hit, families and friends looked on in agony, exhaustion and hope as workers painstakingly lifted slabs of flattened apartment blocks.

“Let me see who it is!” one man shouted.

In small green spaces close to the damaged buildings, tents went up for frightened families to spend the night.

“It was so cold last night,” said Nilgun Yikariz, 59, who was sleeping on the grass in a small tent outside her destroyed apartment.

Nearby, Azize Akkoyun recognised parts of her family’s apartment in the ruins as she waited for news about her missing loved ones.

“Those curtains, they belonged to my daughter’s in-laws,” Akkoyun told AFP. “God willing they will come out alive.”

Hope grew that more survivors could be found following reports in Turkish media that a mother and her three children were rescued some 23 hours after disaster struck.

A 53-year-old and 62-year-old were also pulled out alive hours after the quake, media reports said.

The government’s disaster agency AFAD said 100 people have been rescued.

But the wait was agonising and the recovery work excruciatingly slow, punctuated by long silences in which rescuers — often stretched out on their knees, with their heads poking into open cracks — listened for signs of life.

As his family settled inside their white tent, Cemalettin Enginyurt, 51, described feeling “helpless”.

The retired soldier said his family’s home suffered “serious” cracks and he feared people being unable to tell if their homes were fit to return to.

“As it currently is and with the risk of aftershocks, we decided the solution was to stay outside,” he said.

The latest earthquake will renew fears over when Istanbul might be hit by a big tremor after the devastating 7.4-magnitude one in 1999 in Izmit, western Turkey.

This is the second powerful earthquake to hit Turkey this year, after one in the eastern city of Elazig killed more than 30 people in January.

The tremor was felt as far away as Athens and Istanbul.

On the Greek island of Samos, which is home to 45,000 people and a large migrants’ camp, the civil protection agency described the situation as “extremely difficult”.

“Churches, ports and houses will be rebuilt. With the help of God and men,” said Priest Emmanouil, whose church in the island village of Pythagorio was damaged. “But lost souls do not return.”

“All of Greece is mourning,” added visiting Greek Prime Minister Kyriakos Mitsotakis, who broke a longstanding chill in relations with Turkey by calling President Recep Tayyip Erdogan to express his support.

Erdogan was expected to visit Izmir later on Saturday, giving encouragement to families and signal that Turkish authorities had not lost hope.

But a sense of peril hung over the coastal province, with large cracks and broken plaster lining buildings that looked like they could fall from another bad shake.

In Bayrakli’s city centre, families wept and prayed at the first funerals for the victims of the quake.

“I can’t cry anymore. Look I’m not crying,” one woman wailed. “Mother, when will I see you again?”