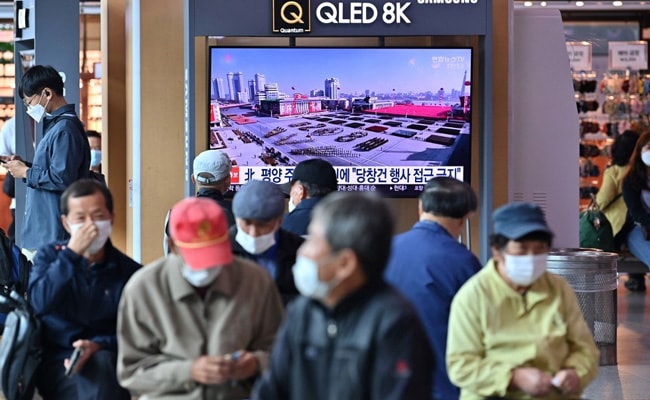 Nuclear-armed North Korea appears to have held a giant military parade early Saturday, Seoul said, with Pyongyang’s latest and most advanced weapons expected to have been on show in the coronavirus-barricaded country’s capital.

The widely anticipated display is part of commemorations of the 75th anniversary of the North’s ruling Workers’ Party.

Such events typically feature thousands of troops goose-stepping through Pyongyang’s Kim Il Sung Square, named for North Korea’s founder, under the gaze of his grandson Kim Jong Un, the third member of the family to rule the country.

A cavalcade of progressively larger armoured vehicles and tanks usually follows, culminating with whatever missiles Pyongyang wants to highlight.

They are keenly watched by observers for clues to its weapons development.

“Signs of a military parade — involving equipment and people on a large scale — were detected at Kim Il Sung Square early this morning,” Seoul’s joint chiefs of staff said in a statement.

South Korean and US intelligence agencies were “closely tracking the event”, they added.

The parade is part of commemorations marking 75 years since the founding of Kim’s ruling party, an anniversary that comes during a difficult year for North Korea as the coronavirus pandemic and recent storms add pressure to the heavily sanctioned country.

Pyongyang closed its borders eight months ago to try to protect itself from the virus, which first emerged in neighbouring China, and has yet to confirm a single case.

Last month, troops from the North shot dead a South Korean fisheries official who had drifted into its waters, apparently as a precaution against the disease, prompting fury in Seoul and a rare apology from Kim.

The North is widely believed to have continued to develop its arsenal — which it says it needs to protect itself from a US invasion — throughout nuclear negotiations with Washington, deadlocked since the collapse of a summit in Hanoi in February last year.

Analysts expected a new submarine-launched ballistic missile (SLBM) or an intercontinental ballistic missile (ICBM) capable of reaching the US mainland to appear — maybe even one with multiple re-entry vehicle capabilities that could allow it to evade US defence systems.

The anniversary of the Workers’ Party means North Korea “has a political and strategic need to do something bigger”, said Sung-yoon Lee, a Korean studies professor at Tufts University in the United States.

Showcasing its most advanced weapons “will signal a big step forward in Pyongyang’s credible threat capabilities”, he said.

But unlike on many previous occasions, no international media were allowed in to watch the parade, and with many foreign embassies in Pyongyang closing their doors in the face of coronavirus restrictions, few outside observers were left in the city.

Foreigners were not welcome at the anniversary commemorations, according to the Russian embassy in Pyongyang, which posted a message from the authorities on its Facebook page urging diplomats and other international representatives not to “approach or take photos” of the venues.

State broadcaster KCTV did not show any early-morning parade live, and had not carried footage of it by lunchtime.

The North has usually held its parades in the morning and generally streams them in real time or near-live, but the last two, both in 2018, were shown either later that day or the next morning.

A morning schedule announced by KCTV on Saturday had no mention of the parade, instead including a documentary about Kim Il Sung titled “Our Dear Leader” and a cartoon called “Boy General”.

But specialist service NK News cited multiple sources saying they had heard sounds of aircraft flying by, drones and heavy machinery during the early hours of Saturday morning.

At the end of December, Kim threatened to demonstrate a “new strategic weapon”, but analysts say Pyongyang will still tread carefully to avoid jeopardising its chances with Washington ahead of next month’s presidential election.

Showing off its strategic weapons in a military parade “would be consistent with what Kim Jong Un promised”, while “not provoking the United States as much as a test-launch of a strategic weapon”, said former US government North Korea analyst Rachel Lee.

But Harry Kazianis of the Center for the National Interest warned that with thousands of people involved, it could turn into a “deadly superspreader-like event” unless “extreme precautions” were used.

The impoverished nation’s crumbling health system would struggle to cope with a major virus outbreak, and he added that such protective measures seemed “pretty unlikely”.