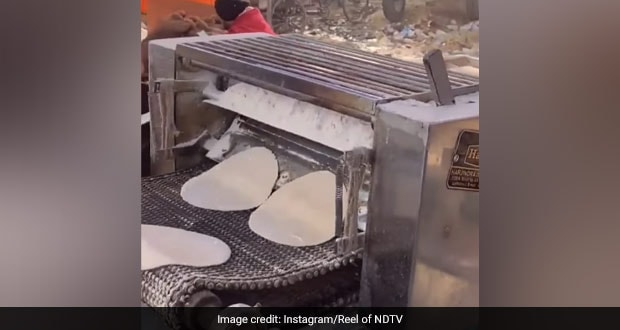 This automated roti machine is generally used across Gurudwaras.

The ongoing farmers’ protests at Delhi borders against the Centre’s farm laws have taken over the country by storm with many coming out in support of the farmers. While the talks are on with the government, the farmers are peacefully camped at Singhu and Tikri borders with not just the ration that can last for months but now also an automated chapati machine that is winning the internet!

On Monday evening, NDTV posted a video from the site of protests where a huge machine has been installed to ensure a faster and easier way to prepare chapatis. This automated roti machine is generally used across Gurudwaras including the Golden Temple in Amritsar to prepare langar, which feeds thousands of people a day.

The ongoing protests have various camps on the border, and the protestors, ready with all the essentials that they’ve brought with them, are preparing food on portable stoves. Meanwhile, The Khalsa Aid Foundation has come to the rescue of farmers for arrangement of tea and snacks including kheer and bottled waters. Amarpreet Singh, the Director of the Foundation spoke to NDTV and revealed that besides food arrangements, the Foundation has also set up 20 mobile toilets for women so that the farmers don’t face any hassles wile camping day and night.

In the video, one can see how the balls of dough are put in the motor machine which rolls and flatten them all within seconds. The machine cooks the rotis further with the help of fire under the machine that is controlled by someone, and the rotis come out piping hot! The machine can make up to 2,000 chapatis in an hour as per Delhi Gurudwara Committee. Isn’t it a great way to save time and energy, both?

About Aanchal MathurAanchal doesn’t share food. A cake in her vicinity is sure to disappear in a record time of 10 seconds. Besides loading up on sugar, she loves bingeing on FRIENDS with a plate of momos. Most likely to find her soulmate on a food app.